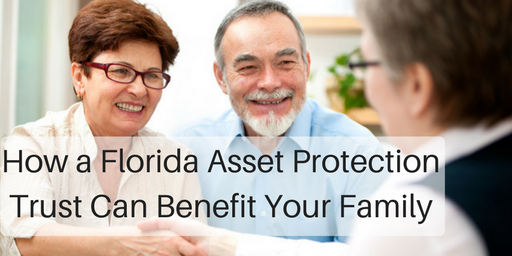 How a Florida Asset Protection Trust Can Benefit Your Family

The first step in understanding how an Asset Protection Trust can benefit your family is defining what it is. In legal terms, assets are understood to be anything you own that has monetary value. The protection of these in the form of trust aims to avoid any seemingly unnecessary financial tolls which will have a detrimental effect on the beneficiary, and on you. In other words an Asset Protection Trust is exactly as it sounds; a legal method in which to protect your assets for the future.

Many people are under the impression an Asset Protection Trust is something only extremely wealthy households need, however those of moderate earnings may benefit even more from this type of security. Asset protection works differently depending on the state. In Florida, the state has made this type of trust quite attainable (its formal name is iPug) and it is widely becoming one of the most widely used estate-planning methods.

So how does such a trust benefit your family? Well, one of the purposes of Asset Protection is to ensure that the beneficiaries (in most cases, this is your family) receive as much of your resources as possible. This means that the trust is protected in the future from creditors and it can also avoid probate. Probate is the legal process that takes place after an individual passes away, during which the court ensures all their debts are paid and distributes their assets. This can be a lengthy, expensive procedure during which the family has little privacy or control. Having a will does not always mean you can evade probate, so setting up an Asset Protection Trust can be extremely beneficial.

Another positive that this type of trust holds is it application for Medicaid eligibility, as it helps to distribute your assets so you are not over the threshold for assistance, which can financially assist your family a great deal. Furthermore, the assets in this trust can be used in your retirement to provide a higher quality of life. Finally, there are tax benefits applicable to this manner of estate-planning.

All in all, there are many positive aspects for you and your family if you choose to put your assets into a protection trust. If you want to know more information, contact your legal representative.

Estate Planning in Florida – Preparing for the Future

Estate planning is the practice of officially and legally arranging what will happen to an individual’s estate (the person’s net worth) during their life and upon their passing. Estate planning differs slightly from a will, as it can apply to extra items that are not addressed by the later – for example bank accounts and retirement plans. This process also plans for incapacity, assists in the clarity and certainty over future probate procedure and finally endeavors to ensure the amount of the individual’s estate is fully maximized. This is done by attempting to reduce taxes and other such expenses; in some situations a trust may be used to do this.

One of the overall aims of estate planning is to help lessen the amount of decisions in later life, avoiding undue stress in what can possibly be an already emotionally demanding situation. It basically sets out a route for your family to follow, dealing with not only financial disposition, but also with end of life and care decisions. After an individual’s passing all estate must go through a probate period, which is a time during which the court deals with all aspects of the estate, assets and distribution. By having a thorough plan any discrepancies that could end with your family going through a lengthy probate period can be avoided. One thing Florida does practice is summary administrations, which mean that if a person’s estate is valued as less than $75,000, an heir may be able to cut out the probate procedure altogether.

It is important to note that estate planning laws do vary state to state. This is why it is essential to get yours evaluated under Florida law in order to ensure its validity if, for instance, you have recently moved into the area. The same rule applies to former residents who had their estate planning organized in Florida – the document will need to be examined by a legal expert in their new state so as to guarantee its legitimacy.

There are many paths to take when it comes to estate planning, and they are based on the person’s individual assets, unique situation and goals. It is best to discuss estate planning with a legal representative who is an expert in this type of law to make sure you and your family will have a thorough and detailed plan, thus avoiding any additional emotional and financial stress in the future. 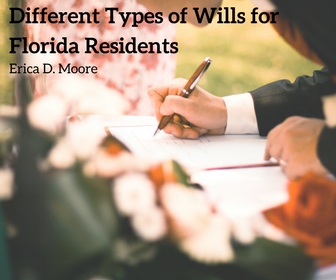 There are many different types of will, however only some are considered legally sound in the state of Florida. Your will is incredibly important, and one which is invalid can cause your family serious issues in the future. Anyone who is over the age of 18 and is compos mentis can make a will, but there are certain requirements that must be met in order for them to be lawfully recognized.

In order for a will to be considered valid, it must meet the following criteria:

This type of will can apply even if said will does not comply with Florida’s requirements.

A will can still be contested for many reasons such as defective execution, forgery, undue influence and duress. If the will is contested, then the onus is on the party presenting the will to certify its legality. If the will is established as being legally correct, then it is the other parties’ responsibility to prove otherwise. 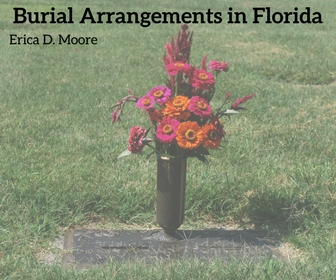 Until 2005, Florida Law was relatively unclear with regards to burial arrangement details. As a response to this, the state has since attempted to clear up any issues by creating expansive and thorough legislation. The specifics of this law can be found in further detail in the Florida Statute 497.005, which comprehensively addresses all legal aspects of the burial process, amending Florida statutes Ch.470 and Ch. 497.

The statute’s purpose was in part to avoid legal issues with regards to the burial arrangements of an individual. Before this law came into play, when people had passed away and had neglected to record their burial wishes, there was often conflict as to what these may have been. Different parties would want different arrangements for the deceased: burial site, cremation, organ donation etc. The Anna Nicole Smith case (Arthur v. Milstein) is a famous example, with the burial not being undertaken until over a month after her death due to a dispute with family members over where she should be laid to rest. Such events drag out longer than they should and cause unnecessary pain to all those involved; as such the state of Florida passed the legislation to avoid such instances in the future.

This law now states that a “legally authorized person” will be in control of the deceased, and provides a list that details whom that person may be, and in which order:

If no family member is available, the term can also apply to the deceased’s guardian, attorney, personal representative, a friend not listed but who is willing to undertake the responsibility, health surrogate or other official (see the statute for further details). If an individual is part of the military, they can name a person in the Record of Emergency Data.

Even with the above, there can still be disputes in court regarding burial arrangements. Some have argued this statute goes against the Florida Probate Code, which treats spouses and children as equal parties when it comes to an intestate decedent (a person without a will). In this case, the court has the final decision as to who has responsibly. In other instances where parties are in dispute, the court has also taken the deceased oral statements into consideration with sufficient evidence, even if their will contradicts this, as the deceased should still have priority as far as is possible. 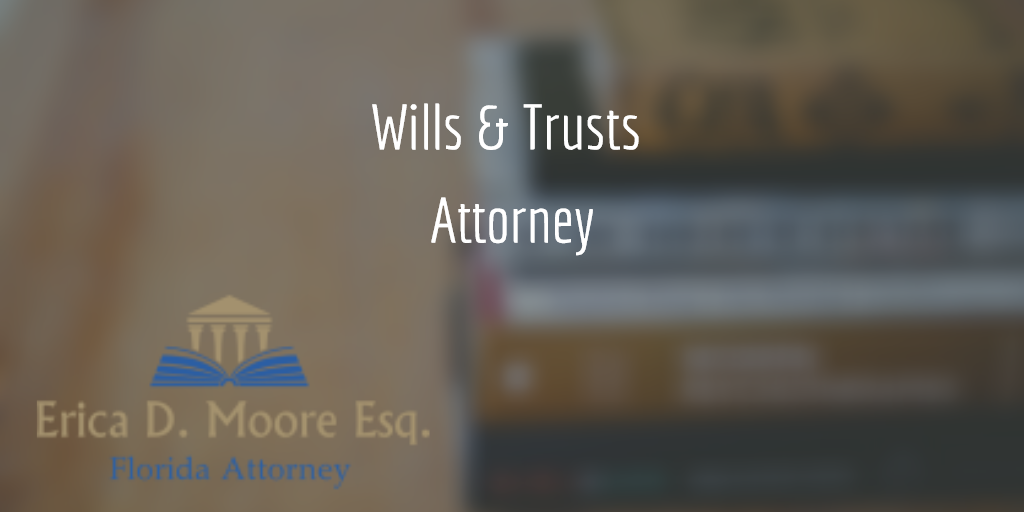 What is a Wills and Trusts Attorney?

Another word for a Wills and Trusts Attorney is a Probate Attorney. They manage the filing of the last will or testament of a deceased individual and handle the potentially difficult disputes that come from the nature of property and deal with the division of the estate of the passed individual.

Who needs a Wills and Trusts Attorney in Florida?

Many people don’t think to hire a Wills and Trusts Attorney until after someone has passed away, this can cause a flurry of problems. When waiting for that moment, there is a sense of urgency which in turn does not ensure that the lawyer you are hiring is truly one who will best represent your interests. This also can be difficult depending on how much planning the deceased did while they were still living.

If the deceased had a detailed will created, then much of the complicated aspects of this process won’t be applicable. This will help to avoid adding to any emotional distress after one passes away. While it isn’t something that is easy to do or address, in the long run, having a legal will helps assure that our property is being divided to whomever we so choose and in the correct amount.

Legally speaking, you do not need a lawyer to write a will or handle an estate, you can technically do this on your own accord. However, this is rarely advised due to the fact that if there is a failure to execute the property legally, it may end up in a personal liability lawsuit after it is all done which can tie up the property for years.

One of the most important aspects of this is to make sure to take care of as much of this as possible before one passes away. It will save families added grief and make the process of handling your affairs much easier once you’ve gone. It’s one of the best gifts you can give to your loved ones because they won’t have to spend weeks and months attempting to interpret your wishes and potentially entering into intense property battles.