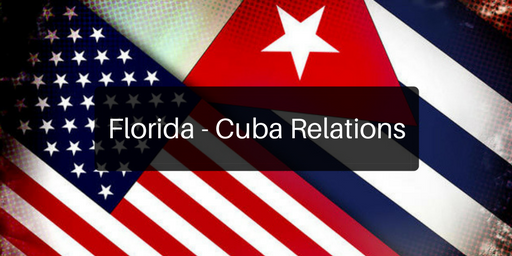 The United States, and Florida in particular, have had a complicated relationship with Cuba for over 50 years. The complications began when since Fidel Castro gained control of the country in 1959, spurring millions of Cubans to immigrate to the U.S. in hopes of finding freedom and better opportunities.

Florida and the Cuban Adjustment Act

The Cuban Adjustment Act of 1966, commonly known for its “wet foot/dry foot” policy, is the act under which Cubans were able to immigrate to the United States from 1966 to 2017. Under this act, if would-be Cuban immigrants were intercepted en route from Cuba to the United States, they were required to return to Cuba. If they were able to set foot on American soil however, they would be permitted to stay and live in the U.S. After a year, these immigrants had the opportunity to become United States citizens. Florida was the destination of choice for most immigrants, and over 1.2 million Cuban Americans call the state home.

Resumed Relationships between U.S and Cuba

In December of 2014, President Barack Obama and Cuban leader Raul Castro announced a restoration of the diplomatic ties between Cuba and the United States. The effect on Florida was immediate: in the two years that followed, the Florida Coast guard reported an increase in the number of Cubans attempting the crossing between Cuba and Florida. Between 2015 and 2016, the number had nearly doubled as over 5,600 Cubans sought to reach the state of Florida. The reason for the increase was Cuban fear that resumed relationships between Cuba and the United States would also mean the end of the Cuban Adjustment Act. These fears were validated in January 2017, when the Obama administration called for an immediate end to the policy.

The repeal of the Cuban Adjustment Act by no means lessened Cuba’s impact on the United States, however. Cuban Americans are the fifth-largest ethnic group in the United States and their influence is felt most strongly in Florida, where Cuban American voters make up the most Republican Latino group and contribute to the state’s already-unpredictable swing vote.

Floridian Cuban American immigrants have strong views about immigration policies as well as increased economic activity between the U.S. and Cuba. This means that political events in Cuba can become strong predictors of how Cuban Americans in Florida may vote in local, state, and national elections. Polls demonstrate that the political actions of the United States toward Cuba have largely been in line with the desires of Cuban American immigrants, and can perhaps attest to their influence upon foreign policy. For now, Floridians can expect to see fewer Cuban immigrants in the coming years but should keep an eye on news from Cuba during future election cycles.